By mitchellvs May 1, 2015 Small Animal
No Comments 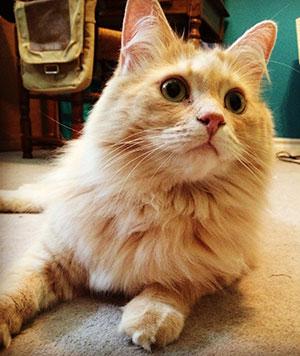 Here at Coventry Animal Hospital, we are often asked about certain cat behaviours and why cats do the things they do. So today, we are discussing the reasons behind some of these behaviours.

Purring is one of the most common behaviours we are asked about. Many cats (in their home environment) will purr when they are feeling happy or content, often during interactions. Mother cats will also purr when nursing young. However, for some cats purring can be a way to help calm stress and they can purr when they are nervous or scared. Interestingly, cats actually purr in a frequency that helps promote bone and muscle healing which lends some truth to the old wives’ tail about sitting with a cat when you are sick or injured! This may also explain why cats can heal a lot faster than some other animals when injured. 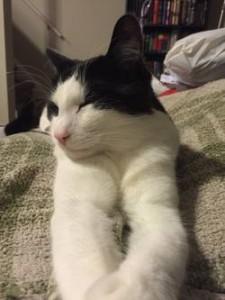 Cats meow as a way of communicating with humans. Early on, cats must have learned that humans were poor with interpreting cat body language and so, started to vocalize for attention. Feral cats rarely meow to each other and that is why it is thought to be a communication tool evolved strictly for interaction with humans. Cats also meow at a frequency close to a human baby’s cry which is more likely to get our attention. Cats have different meows for different purposes (greetings, asking for food, etc.) and each individual cat essentially has its own language to get the attention of its owners.

The first time a cat kneads is as a kitten while feeding from mom. The kneading helps to express more milk and is therefore an instinctual and innate behaviour. However, it is not totally understood why adult cats knead and there are multiple theories. One theory is that it is just comforting to cats and reminds them of the comfort they had while feeding from their mothers. Another aspect is that it is a way for cats to mark their territory since they have scent glands in their feet. If your cat kneads on you, that means you are very special to him!

Cats scratch as a way to mark their territory and keep their nails healthy. When they scratch, the scent glands in their feet release their scent onto the surface.  This is such an instinctual behaviour that even cats without claws will still do the scratching motions.  It is important when you own a cat to always provide multiple areas for it to scratch. Make sure scratching posts are kept in areas where people frequent the most, as these are the areas where cats feel the need to scratch to mark their territory.

Rubbing Their Face Against Things

This is another form of marking territory through the scent glands in their face but also serves other purposes. The pheromones released by the glands in their faces seem to have a calming effect on cats. So, while a cat rubbing its face on things can let other cats know that this is his space, it also provides comfort to your cat knowing he is in a familiar place because of his scent. Rubbing his face on you means you are his and is a great symbol of affection.

Have you ever noticed your cat holding his tail straight in the air and it quivering? This is a great sign of affection and means your cat is super happy to see you!

While cats remain the more mysterious creature compared to dogs, it is nice to know that a lot of their interesting and unique behaviours are their subtle signs of affection for us!