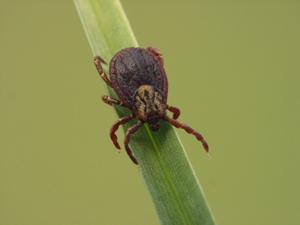 We have had some unseasonably warm weather here in Perth County – which means that ticks are active! There are two spikes in the tick population each year, occurring in the early spring and late fall.  However, any time the temperature is above 4C, ticks are on the move and searching for a warm body to feed on.

Ticks are arachnids that feed on blood from small wildlife, dogs, cats and humans. Female ticks require a blood meal to complete their life cycle.  Ticks start as eggs laid in the summer, emerge as larvae in the fall, molt into nymphs in the winter and end up as adults in the spring.

Ticks are mostly found in wooded areas, along the side of trails, playgrounds and grassy areas in urban areas. There are several species of ticks.  The deer tickfeeds primarily on white-tailed deer in its adult form, but all life-stages of the tick will feed on dogs and humans.

Tick bites are usually not painful, but cause some mild swelling and redness. The bad part is that tick bites can transmit diseases; Lyme disease is one of the most prevalent in our region.

Tick numbers are on the rise in this part of the country.

Here is a map of Canada with the number of tick-borne diseases reported in dogs tested with a blood sample since 2017: http://www.petdiseasereport.com/content/prevmap.aspx

The Public Health Agency of Canada has a map with locations in Ontario that have the highest risk of Lyme disease transmission.