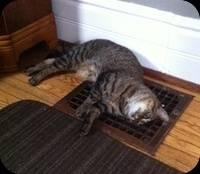 Cats generally have their first heat cycle by six month of age.  A female cat that is not spayed is known as the “queen”.  Some cats may start their cycle as early as four months of age.  Your female pet can become pregnant on their first heat cycle, as they are sexually mature.  This is inadvisable, as they are not done growing and more likely to have complications associated with the birthing and be poor mothers.  At Coventry Animal Hospital, we recommend spaying (ovariohysterectomy) your pet at six months of age.

Cats are “seasonal breeders”, which means that they come into heat in the spring and fall and are not cycling the rest of the time.  Signs of heat in a cat include loud yowling, rolling on the floor and crouching with elevated hindquarters; these signs may be mistaken for signs of pain.  The queen sometimes sprays fluid in the house, but a bloody discharge from the vulva is not generally observed.  These signs are seen during the estrus phase of her cycle and last for approximately one week.  If the female cat is bred, she will be induced to ovulate and will either go into diestrus, which lasts 30-40 days or become pregnant for approximately 63 days.  If a female is mated several times, multiple ovulations will be induced, which makes it possible for several males to father a litter and the siblings will have different fathers.  On the other hand, if the female is not mated, she will come back into estrus in one to three weeks.  That’s a lot of days in the year to put up with an extremely vocal kitty!

Our Veterinarians recommend spaying a female cat before their first heat to eliminate their risk of accidental pregnancy and minimize their risk of reproductive diseases.  Please refer to our website www.coventryvets.ca for Pet Health Articles under ‘Spay’.  A female pet that is not spayed is at risk for life-threatening pyometra (an infection in their uterus), as well as breast cancer.

Accidental pregnancy can easily happen as separation within a household can be extremely difficult.  If the male 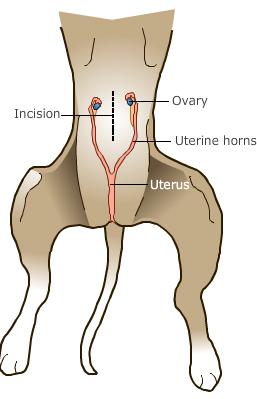 and female are together for a 10 minute time-frame, that is long enough for them to breed.  Brothers and sisters will mate once they become sexually mature – they do not know that they are related.  Pets living on the farm will be more likely to roam off their property in search of a mate and indoor cats may try to escape.

Here at Coventry Animal Hospital we encourage having pets spayed when they are not in heat.  Pets can be spayed while in heat, but there is a higher risk of bleeding during surgery, as their reproductive organs have increased blood flow.  It is more expensive to spay a pet that is in heat, pregnant, obese, or older than one year of age, as these are all factors that make the surgery more difficult.

If you have any questions about the spaying your cat, then don’t hesitate to contact Coventry Animal Hospital.  We would love to discuss it with you!