Understanding how puppies develop can help you start your puppy off right. There is a critical socialization period during which time your pup will need to have exposure to people, dogs and surroundings if they are to accept them and be well-adjusted confident adults.

Neonatal Period: 0 to 2 weeks – Puppies are born deaf and blind.  During this period, a puppy uses touch and taste to find warmth and food from its mother.

Transition Period: 2 to 4 weeks – Puppies hearing and vision develop during this period.  This means that they are exposed to the sounds where they are raised.  They learn to walk too.

Socialization Period: 3 to 12 weeks (in some cases until 18 weeks) – During this period, it is vital that a puppy has opportunities to meet other dogs and people.

Traditionally, puppies are weaned from their mother at 8 weeks of age. While with their littermates and mother, a puppy is learning important skills through play and exploration.  A puppy will learn about the consequences of its interactions.  For example, a puppy will learn that biting its littermate too hard will result in its wrestling buddy walking away and playtime is over.  Ideally, you want to adopt a puppy that has been raised inside a home with handling by various people, including men.  If possible, you want a puppy that has lived with and had positive experiences with adult dogs too.  Well-socialized dogs are more likely to have well-socialized offspring, as their pups observe how their mother interacts with people. 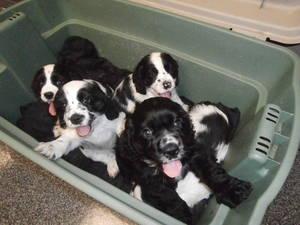 There is a saying that your puppy should meet 100 new people in 100 days. This means people of different ethnicities, genders, young and old, friends, family and strangers, people wearing hats, with facial hair, no hair, babies in strollers, teenagers on skateboards – you get the idea.  If your puppy has positive interactions with a variety of humans during the critical socialization period before it develops fear, it will learn that interactions with humans are generally positive.  A positive interaction is one where the puppy enjoys its experience – this can be enhanced by having rewards (such as tasty treats), play and petting being offered.  However, it is important to clarify that having a small number of positive interactions is far more valuable than having a vast number of exposures, especially if too many of them are negative exposures.

How can I socialize my puppy before it is vaccinated? Plan puppy play dates and invite a friend’s well-socialized (vaccinated) adult dog to meet your puppy at home.  Host a puppy party where family members come and offer your puppy treats.  You can walk your puppy in town and expose it to pedestrians and traffic noises from a comfortable distance.  All of these activities need to be kept short and done at a pace that your pup feels comfortable with.  Supervise your puppy when it is interacting with people, other animals and places.  If your pup will be expected to ride quietly in the car – now is the time to expose it to short drives.  Start exposing your puppy to a grooming routine, which includes exposure to brushing, examining ears and handling paws.  If its ears are back and it looks apprehensive and will not take a treat, it is a cue to give it more distance from its current interaction.  Your puppy will gain a lot from its experiences even if it doesn’t have direct exposure.  Remember that puppies are toddlers and although nurture plays a big role, nature does as well.  Some puppies will naturally be shyer and others will be more outgoing.  As its pet parent, your role is to watch your pup’s body language and work within its comfort zone to bring out the best in him.

Socialization is an ongoing process that doesn’t end when your puppy gets older. It is just as important to continue re-exposing him to people, animals and places so that he remembers the positive associations.  Last but not least – have fun.  Puppy training and puppy socialization will have its ups and downs, but if you’re not enjoying the journey, then you’re not doing it right!

If you have any questions about socializing your puppy ask one of our team members at Coventry Animal Hospital.