By mitchellvs May 23, 2019 Small Animal
No Comments 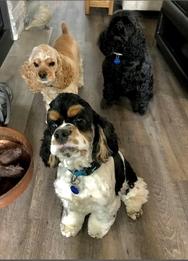 Let’s say you already have a dog at home and you have made the decision to add another dog to the household – how wonderful!  Congratulations!  Dogs tend to be a social species and many of them would love to have a canine companion to interact with.  Getting a second dog is not known to reduce separation anxiety for a dog already in your home, but it can be a great way to fulfill their need to socialize!

If you had your first dog from puppy hood onwards, he has grown into a bond with you and his routine.  He likely feels that your home is his safe place.  He knows the “house rules” to abide by, which can differ from one household to another.  For example, some owners love having their dog cuddle on the couch with them and others do not permit their pets on the furniture.

Adopting an older dog means that they come from a previous situation that may have had a different set of rules.  In addition, there is a good chance that they have gone through a period of uncertainty, including the loss of their previous owner, an upheaval in their routine or perhaps they have been staying in a shelter or foster home for a period of time.  Some rescue dogs come into our home and seem to display extremely polite behaviour, but in reality, they are too frightened with all of the recent changes to open up and show their true personality.  It can take months of being in their new home for them to regain enough confidence to shine.

How to Set Up the Meet and Greet

Puppies on the whole (there are some exceptions), tend to be very open to socializing and playing with new dogs, but this inclination diminishes after they reach social maturity.  Some adult dogs no longer have the same interest to meet with and play with dogs that are unknown to them.  This is a generalization, but you likely have a good idea of how your dog at home reacts to meeting a visiting dog.

It is highly recommended to have an area designated for the dog that is currently living in the home, as well as a SEPARATE area for the newcomer to have as their safe place.  In the initial stages, this may mean having baby gates up, or having one dog crated while the other is out.  They can take turns in a communal open space.  There is no reason to rush the dogs to live in the same living quarters.  They can eat in separate spots, so there is no concern that one dog will steal another dog’s food.

Using a calming pheromone diffuser in the shared space or where the dogs spend the most time can be a nice way to reduce both dogs’ anxiety.  Please ask your veterinarian if anti-anxiety supplements or medication would also be appropriate.

A word of caution: boundaries are extremely important for safety, but some dogs perceive barriers (such as leashes or baby gates) as very frustrating and will actually become more reactive when interacting with another dog if a barrier is involved.  This is because they cannot do proper dog greetings or read the other dog’s body language correctly.  Visual access to the other dog may need to be blocked.  For example, stationing the dogs in rooms separated by a door when they are home alone.

Now for the fun part!  You want to make it rewarding for each dog to be around one another.  This involves rewarding calm behaviour, such as having both dogs sitting in the same room or lying down on dog beds in close proximity.  You can offer one-bite treats for this calm behavior, providing that neither of them exhibits resource guarding.  Resource guarding is defined as a dog protecting something they view to be valuable, such as a favourite person, toy, location or food item.  Research has shown that jealousy does not exist between dogs, but rather, some dogs have retained an ancestral instinct to protect food (or other items).  Resource guarding should be addressed with the help of a veterinarian or veterinary behaviourist.

Sticking to a routine and having short positive sessions of supervised time in the communal space throughout the day will allow both dogs to understand what is expected of them, which in turn builds confidence.  They know that they will be safe at all times.  If you have specific concerns regarding aggression between dogs that are already living together, please don’t hesitate to contact our team at Coventry Animal Hospital.